When I first came to Netherlands, the word poker reminded me of only 2 things. The song Poker Face by Lady Gaga and my lab partner in my Bachelors Fahad Ali trying to tell me how he used to play poker which at the time I never understood nor tried to understand.

After coming to Netherlands, one fine day, my friend Hardik tells me that he has found someone selling a Poker set and that we all should pitch in and buy it. I go oh what the hell and agree reluctantly. After that day, we have played a few times and I grew more and more familiar with the rules.

Now you would be wondering why am I boring with these worthless details about poker. I ll tell you why. 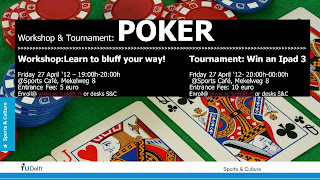 Recently I came across this ad:

Now who in their right mind would go if they only started to play a few months ago ? But I had to try. Who knew ? I just might win ;)

So I go register for the tournament and try practising for it only to realise I lose every single time :P But the D -day came and I start off into the sunset, walking towards the Sports Centre. The tutorial session was going on and there was a huge crowd around the 4 beautiful poker tables. We all wait patiently till the tutorial session finishes.

Then Anoeshka Ishwardat, the lady in-charge, calls our our name and allots us to one of the 4 tables. When my name is called and allotted to table four, I gingerly make my way to the table and join the others.

4 Tables. 10 at each table. A little bit crowded but that is okay. Rules are explained and we begin. The first hand is dealt and the dealer for the table asks for folds. This was new to me. I was still trying to pick my cards and I thought he was asking it back because of a mistake. I then realise I just folded before I even saw my cards. I felt like a jackass and was so glad my poker buddies Hardik and Ravi werent there for if they would have been, they would be laughing on the floor then and there.

Embarrassed I play and see my coins begin to dwindle. I waited for the right cards and then voila. I strike big. There were only 2 Indians out of the 40 and both of us were at table 4. He kept losing his coins till he used to go all in and like a Phoenix he used to rise again. This happened 4 times till on the 5th time, I took him out :P

So many different kind of players all playing for the Ipad 3. While some stared so hard at you that you thought you were gonna melt there were some friendly ones as well and of course there were some who just dint care about you. It made me think back to the scenes from James Bond. And as the bar girl approached us for our drink order, I was so tempted to say "Dirty Martini - shaken not stirred" but all I managed to say was "no thank you". Of course, it is a different issue that they do not serve it in the sports bar :D

It was great fun till our table players were reduced to 5 and we were shifted to other tables. I sit at table 3 and see the players go out one by one till players from table 1 and 2 all join us to make the final 10 at table 3 playing for the prizes.

Not bad I thought. Made it this far. I just might pull it off ;) But alas I played a hasty all in and lost it all. In the end, made it to the final 9. Saw the numbers dwindle to the final 3,2 and the winner.

The winner had kept going all in for the last hour or two and had finally won the Ipad 3. Oh well, guess I will have to buy one after all :P

PS: My friend Ravi was telling me yesterday that he ran into the guy who won the Ipad and apparently he was saying that he attended the tutorial before the tournament and that is where he learnt the tactic to go all in and win.