A week ago when there was event posted online by TU Delft organising a Anti-Gravity experience, few doubted that this was a con that TUD had prepared for us.

Spring was setting in and there were colours all around. The cherry blossoms turning from pink to white and tulips and various other flowers making an appearance everywhere.

Exams were a couple of weeks later and preps were yet to go full throttle. The sun was out more and we all waited hungrily for exams to get over and go around and have fun for as the saying says : Make hay when the sun shines ;)

So when we heard about the anti gravity experience to be held on the 5th of April, we all got excited. Many started signing up for it. Even the sceptics for who wants to be sceptical and miss out on such an opportunity ?

And so we waited eagerly and on 3rd, I get a notification which said that this was a prank set up by the Social Media Team on the occasion of April Fool's Day. However, on 1st, Facebook locked them out of the event page for 2 days and hence the delay :P

So in the end, FB ended up making a fool of TUD :D

Funny part was, I get a call from a friend on 5th asking where the event was since many of the people have showed up and are waiting for the organisers to come and take them for the anti-gravity experience. Apparently, the posts were not getting delivered to all and many still kept joining the event even after the plot was revealed. Had to tell him then that it was a prank and it wasnt true. 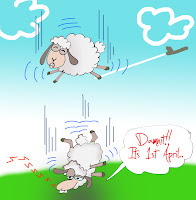 But at the end of the day, I had not guessed that TUD would play with us in such a fashion :P

PS: This cartoon was made by a friend of mine Anurag who was part of the Social Media Team .. Still havent made him pay for fooling us. But some day soon. After all, what goes around, comes around ;)
Posted by Ab9 at 11:47 AM