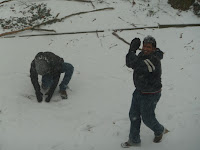 It sure has been a long while since my last post. Exams beating down on you sure isnt a pretty time but it aint no excuse either. It was on 3rd Feb that we had a very heavy snowfall and we sure as hell had a good time packing snowballs (not as easy as I thought) and hurling at each other. After some time we got so tired of making snowballs that we just carried the snow around n hurled it on people :D 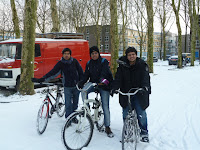 After a few days I was walking by the major Delft canal and I saw this black bird happily walking away on the ice making a nice plop-plop-plop sound. And suddenly the ice gave way and the bird had a dip into the icy cold river. It crawled its way back onto the ice and sat there with a totally new expression staring at the place the ice broke. Looks like the birds do find the water cold after all :P

The snow experience was great. The whole city covered in a blanket of white. It almost brought in a spirit of Christmas. Too bad it dint snow back then. But everything has its own time :)

Few days into the snowfall, it had been walked on, compacted and turned into ice. It was sometimes slippery made getting around scary but it was fun none the less :) 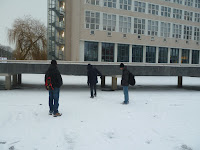 We tried walking on the canal first and boy it was fun until a Dutch lady came to us and told it can be risky and guided us to the frozen pool in front of the Industrial Design. There were people skating and sliding. It was a great atmosphere. Then my friend and I had to be idiots and walked to the other end near a bridge and as we approached it more, we could hear the ice cracking. We panicked and scrambled back to safe ice and told the others. Maybe thats human tendency but they had to disprove it. So off they went and heard it cracking again and came back running as fast as they could :D