Holi - A Festival of Colours : A History 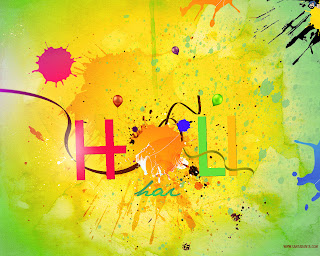 *** Disclaimer: Over time there have been various stories as to how it originated but I will be sticking to a more widely accepted one. If I have not followed the version you are familiar with or have hurt any sentiments, it was unintentional. I seriously hope I do not get chased down and coloured bad for not writing your version ;) No hard feeling right ? ;)


Most of the Indian festivals have a divine and mythological root and Holi is no exception. As always this story is again the triumph of good over evil and Holi is the celebration of this victory. 'Holi' however means 'burning' and its origin is very old. So, I will tell you with 2 stories both of different eras starting with the real one and later on to how it got the colourful front.

*** For those who arent interested in the history, kindly scroll down to the INVITATION section ***

Recommended Prerequisites for the story (TUD Style ;)): There are 3 main Gods according to the Hindu belief. Brahma - The Creator, Vishnu - The Preserver & Shiva  - The Destroyer. This story involves the first two namely Brahma and Vishnu. Now that we have fulfilled the prerequisites, lets begin the story :D

Once upon a time, there was a Demon (Asura) King named Hiranyakashyap who wanted to avenge the death of his brother by the hands of Vishnu (Gods and the Demons keep fighting always!!). So he decides to pray to Brahma for a boon which will enable him to defeat Vishnu. After years of penance, Brahma grants him a boon which almost makes him immortal.

He returns and forces his subjects to pray to him and not to the Gods. But to his disappointment, his son, Prahalad,  turns out to be a devoted follower of Vishnu. This enrages him and he decides to kill him but all efforts go fruitless. Finally he asks his sister Holika, who thanks to a boon was immune to fire, to carry the child and burn herself on a pyre. However, she did not know that her boon came with a conditions apply * and was applicable only if she was alone. So she was burnt to death while his son was unscathed from the fire who was saved by his devotion to Vishnu. Later, even the devil King Hiranyakashyap was killed by the hands of Vishnu but that is a different story.

Holi celebrates the death of Holika symbolically evil. That is why on this day people have bonfires as a symbol of victory of good by the burning of evil.

Now you might wonder then why on this day we play with colours if the real story is celebrated by bonfires. That brings us to the age of another character named Krishna a reincarnation of Vishnu.

Krishna often asked his mother Yashoda as to why Radha (his childhood love) was so fair and he wasnt. To this his mother asked Krishna to apply colour on Radha's face and see how her complexion changes. This slowly became popular and went on to become a village ritual. It increased in popularity as Krishna went on to become a King and his involvement in so many stories to bring justice resulted in a large number of devotees who carried on this tradition of colour.

Since it is celebrated during the time of spring and harvest, it also became a way of celebration for the farmers at the prospect of properity and so burn their first batch of crops as a symbol of offering to Agni  (The God of Fire) and then use the rest for personal and other use.

Story is done and now to the most important part.

We the students of Indian Student's Association (ISA) will be celebrating Holi this year on the Campus of TU Delft on the 11th of March 2012. So do come join us and let us celebrate together the setting in of Spring with colours, Indian snacks, Drinks (alcoholic as well as non-alcoholic) and not forgetting the all important music with a DJ.
The location is the park opposite the Sports Center from 12:00 to 15:00 hours.
So do save it in your schedules and dont forget to bring your friends too.